[No abstract available for this article.]

Public Perceptions About the Quality of Healthcare

This quarter, public perceptions of the quality of care among healthcare users has remained stable - despite reports in the media about inadequacies in services.

Overall, about 80% of healthcare users think the quality of services they received was excellent or good, while about 20% think it was fair or poor.

There has a modest change this quarter in the perceptions of healthcare users about their access to services.

The proportion of healthcare users who reported access to services was "very easy" to obtain is down slightly from March 2003, and is now roughly the same as it was in 2002 but substantially higher than in 2001. There has been no change in the proportion reporting that access was "very difficult."

Also this quarter, the proportion of healthcare users who report they or their families were unable to obtain some or all of the services they needed appears to be on an upward trend. 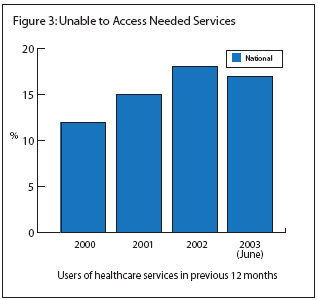 The figure of 17% of people reporting that they were unable to obtain health services is about the same as in 2002 and earlier in 2003, but remains significantly higher than in 2000.

An indication of the impact of SARS is provided by the hospital access data. Between January and March 2003 (just before SARS hit), about a third (36%) of those who said they could not get health services when needed said that these services were in the hospital. Looking at the first six months of the year, however, we have close to half (44%) who say the inaccessible health services were in the hospital. This suggests that during the SARS epidemic (April to June) more than half of those unable to access health services needed hospital services. In the next Index we will provide a more detailed analysis of the data related to SARS.

On the positive side, the national data suggest no overall increase in inaccessibility, despite SARS. The regional data, especially from Ontario, will be examined in the next Index.

Data supplied by The Berger Population Health Monitor. Data from surveys prior to 2002 were administered to Â±2,500 respondents 15 years of age and older in the 10 provinces. Data from 2003 are based upon six monthly surveys from January to June, February and March of 750 respondents each in the 10 provinces plus the three Territories 15 years of age and older for a total of approximately 5,412.

Topics in The Berger Population Health Monitor are selected in consultation with subscribers and the Hay Health Care Consulting Group. The Berger Population Health Monitor surveys are conducted jointly with the Physical Activity Monitor of the Canadian Fitness and Lifestyle Research Institute of Ottawa. The monthly surveys are administered by the Institute for Social Research, York University. For more information contact, Earl Berger, 416-815-6405 or e-mail: Earl_Berger@haygroup.com.