A recent Canadian Institute for Health Information report on all-cause readmission identified that cancer patients had higher-than-average readmission rates. This study provides further insight on the experience of cancer patients, exploring the risk factors associated with readmission at patient, hospital and community levels. An analysis showed that patient characteristics, including the reason for initial hospitalization, sex, co-morbidity levels, admission through the emergency department and the number of previous acute care admissions, were associated with readmission for cancer patients. In addition, we found that the readmission rate for these patients varied by hospital size and whether the patients lived in rural or urban locations.

In this study, the outcome was defined as unplanned all-cause readmission to acute care within 30 days of the index discharge. The study data were derived from CIHI's Discharge Abstract Database (DAD) 2010–2011 and the 2009–2010 MED-ÉCHO data from Quebec. To ensure that all patients could be followed for up to 30 days following discharge, the index hospitalizations were restricted to acute care discharges in the first 11 months of the fiscal year, while the readmission discharges included all discharges in the study period.

The unit of analysis was an episode of care. An episode of care refers to all adjoining in-patient hospitalizations and same-day surgery visits. Cancer patients were identified if there was any cancer diagnosis during the episode. Patients were categorized into surgical, medical, obstetric and pediatric groups, and hospitals were categorized into teaching, large, medium and small community hospitals. Readmissions with chemotherapy as the most responsible diagnosis were excluded because most readmissions for chemotherapy are planned. The cost of readmission was estimated based on CIHI's 2011 case mix groups methodology which aggregates acute care inpatients with similar clinical and resource utilization characteristics and 2009–2011 cost per weighted case. Details about these methodologies can be found in CIHI's readmission report (CIHI 2012).

Logistic regression models were used to evaluate the association of readmission with selected risk factors. Logistic regression modelling was also used to calculate the risk-adjusted readmission rate across jurisdictions, with control for patient group, age, sex, number of acute care hospitalization in the previous six months prior to index, admission via the emergency department (ED) in index, Charlson Index score and case mix group. 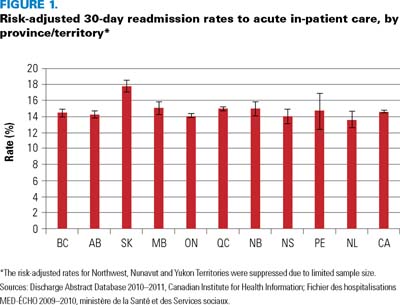 Patient characteristics of patient group, sex, Charlson Index score, admission through the ED and the number of acute care admissions prior to index were identified to be associated with the risk of readmission in cancer patients. Male patients had a higher readmission rate than female patients (odds ratio [OR] 1.15, 95% confidence interval [CI] 1.12–1.17). Surgical patients were less likely than medical patients to be readmitted (OR 0.65, 95% CI 0.63–0.67), while no differences were found between obstetric, pediatric and medical patients. Patients with higher Charlson Index scores (OR for 2 versus 0: 1.25, 95% CI 1.21–1.29), with more acute care visits six months prior to the index (OR for 2+ versus 0: 1.69, 95% CI 1.63–1.75) and admitted through ED in the index (OR 1.51, 95% CI 1.46–1.55) were at higher risk of readmission.

Among medical patients, the top-five case mix groups with the highest readmission volumes accounted for 19% of all cancer readmissions. These conditions included cancers of the respiratory system, radiotherapy/chemotherapy and cancers of the digestive system, agranulocytosis and lymphoma. For medical cancer patients, the most common reason for readmission was the same condition treated in the index. For surgical cancer patients, the top-five conditions were colostomy/enterostomy, large intestine/rectum resection, lymphoma interventions, radical excision of prostate and open thoracic lung resection. The most common reasons for readmission were surgical complications or gastrointestinal obstruction. 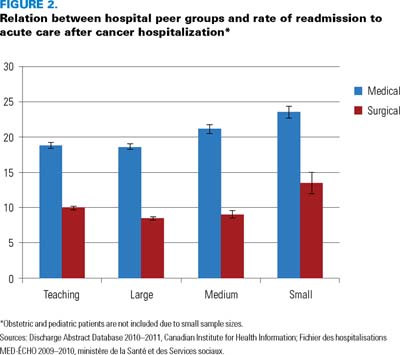 In this study, patient residence – rural/urban residency and neighbourhood income quintiles – was used as a proxy for community care service levels. Compared with those from the most affluent neighbourhood, cancer patients from the least affluent neighbourhood had a higher readmission rate (OR 1.11, 95% CI 1.06–1.15). Readmission rates were higher among patients living in rural areas than among those in urban areas (OR 1.14, 95% CI 1.11–1.18). The impact of patient residency has been reported in previous studies (Greenblatt et al. 2010; Lai et al. 2007).

Our study demonstrated that cancer patients were more likely to be readmitted to acute in-patient care compared with the rest of the in-patient population. The most common reason for readmission for medical cancer patients was the same condition as the one treated during the index. In contrast, surgical cancer patients were most often readmitted for complications or gastrointestinal obstruction. Prior studies suggested that readmissions due to complications and gastrointestinal obstruction after cancer surgery were inversely associated with hospital procedure volume. Prior studies showed that hospitals that did more procedures had fewer readmissions. This could be partly due to the multidisciplinary approach in these hospitals (Gouma et al. 2000; Greenblatt et al. 2010).

The results highlighted in this report with regard to the effects of hospital size and patient residency on cancer readmission suggest that the transition between in-patient and post–acute care may be improved by additional pre-discharge and post-discharge interventions. Reducing readmission rates, however, is not a simple task; rather, it is a multi-faceted issue and, therefore, requires multiple actions from all levels of the healthcare system. This study has identified multiple factors at the patient, hospital and community levels that were associated with the risk of readmission for cancer patients. An improved understanding of these factors may contribute to increased collaboration among leaders of the different system components to improve readmission outcomes.

Hong Ji, MSc, is a senior analyst in health services research at the Canadian Institute for Health Information (CIHI). Ji is responsible for performing analyses and provides methodological support to projects, as well as participating in writing reports.

Hani Abushomar, MSc, is a senior analyst in health reports at CIHI. Abushomar is responsible for performing analyses and provides methodological support to projects, as well as participating in writing reports.

Xi-Kuan Chen, PhD, is a project lead in health services research at CIHI, in Toronto, Ontario. He leads the analysis and development of methodology for CIHI reports.

Cheng Qian, BSc, PMP, is a project lead in health services research at CIHI, in Toronto. She leads and coordinates the design and development of analytical plans for CIHI reports.

Canadian Institute for Health Information. 2012. All Cause Readmission to Acute Care and Return to the Emergent Department. Ottawa, ON: Author.